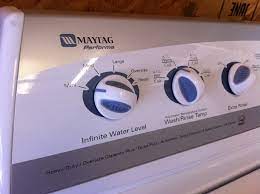 Maytag positions its Performa PAV2300AWW washing machine as a high-capacity model for those with oversize laundry loads. The washer includes features such as fabric softener and bleach dispensers, controls for four water temperature combinations, and four choices of water levels. Features aside, no appliance is immune to a bit of trouble here and there. Specs for a Maytag PAV2300AWW

A nonstarting Performa may indicate a power problem, so check the unit’s electrical cord is securely plugged in, and you don’t have a blown fuse or tripped circuit breaker. Unlike washers with push-button starts, the Performa PAV2300AWW features pull-out dials; you have to set the dial to the preferred cycle and pull the dial outward to start the machine. If the machine has power and the dial is pulled out but it still won’t spin, make sure the washer’s top-loading lid is securely shut; the PAV2300AWW won’t spin until its lid is latched.

If your washing machine starts up but doesn’t fill with water, the appliance may have engaged its motor’s thermal protector. Allow the washer to rest for 30 minutes, then restart it. If the washing machine doesn’t drain, remove any kinks or knots from its drain hose. To remedy a lack of water flow, ensure the connected hot and cold water faucets are set to their “on” positions. Debris in the hose filter can prevent the washer from filling. In this case, disconnect the hose and clean the filter with warm water.

If the Performa’s clothes-washing power doesn’t seem up to par, ensure the incoming wash water is at least 65 degrees Fahrenheit. Maytag recommends adding detergent to the washer before loading it, and warns against wrapping large items or sheets around the unit’s central, cylinder-shaped agitator. Set the water level to “medium” when laundering permanent-press items to prevent wrinkling, shrinkage and seam damage. If the appliance isn’t dispensing fabric softener properly, remove the fabric softener dispenser from the top of the agitator and soak it for one hour in warm water and a bit of dishwashing liquid. Shake and rinse the dispenser to clear it of buildup before replacing it.